Today I would like to introduce you to a very special little man in my life. He has been my longest running roommate in New York,  has lived with me in five apartments, one epic snowstorm, and countless late work nights. Please meet Mr. Charles Dickens aka Charlie.
Charlie was a birthday present not long after my arrival in New York, and I can confidently say my parents were less than thrilled- how was I supposed to take care of small puppy when I was unemployed and living on the balcony of my boyfriend’s apartment with his two roommates? But this little guy is a trooper.

Together we mastered potty training from a 4th floor apartment. I would tuck his tail, wait for the elevator, and coach him nicely as we wandered between the bankers and garbage bags on Park Ave (later cleaning up any puddles in the elevator). Thankfully he was a quick learner. Next we moved into our very own apartment, with three unknown roommates, and no window. Charlie was still a trooper, if less enthusiastic. I cried the day I came home to find he was far too hot in my room and feeling ill. We spent a lot of time with the very large bulldog across the street on St. Mark’s because a.) it was cooler b.) we were living with insane people. This bulldog was also unneutered and gave Charlie an abrupt lesson in standing up for himself.
Charlie took a small vacation with my parents while I attended night school and got a taste of a large Kentucky yard, and living with a large female lab. He came home to me via Delta to our very own apartment. He promptly chewed through two pairs of shoes, but we bonded over late night eats when he was thrilled I was home from the gym, and quietly avoidedthe hoarder across the hall. However, friendly to a fault, Charlie would not quickly walk by our neighbor as she sorted her newspapers from 1993, and became a favorite of old ladies and gents on every floor.

Next Charlie and I moved to the East Village. We loved our morning walks when it was completely silent except for a random late night partier wandering home. He befriended every superintendent who hung out in front of their building, I feel watching out for me as the sun came up.   This is where Charlie became very comfortable sleeping on my bed to avoid the mice running around the floor.

Finally Charlie and I have moved in with the boy. Charlie is very comfortable with our new full time roommate. He enjoys late night wrestling matches, naps on someone else’s stomach, multiple sneaky treats, and sleeping on the foot of the bed. He hesitantly enjoys baths in a full size bathtub and a duo of hairdressers trimming his coat with clippers and a comb on the kitchen floor. Charlie is an up for anything buddy, be it a four mile run in the freezing cold (he bops along with the tunes I hum),  a long car trip to the beach, or even being  unexpectedly thrown into the waves.
He may only be turning 3 years old today, but we have had a wonderful journey of adventures so far. Happy Birthday Mr. Dickens! 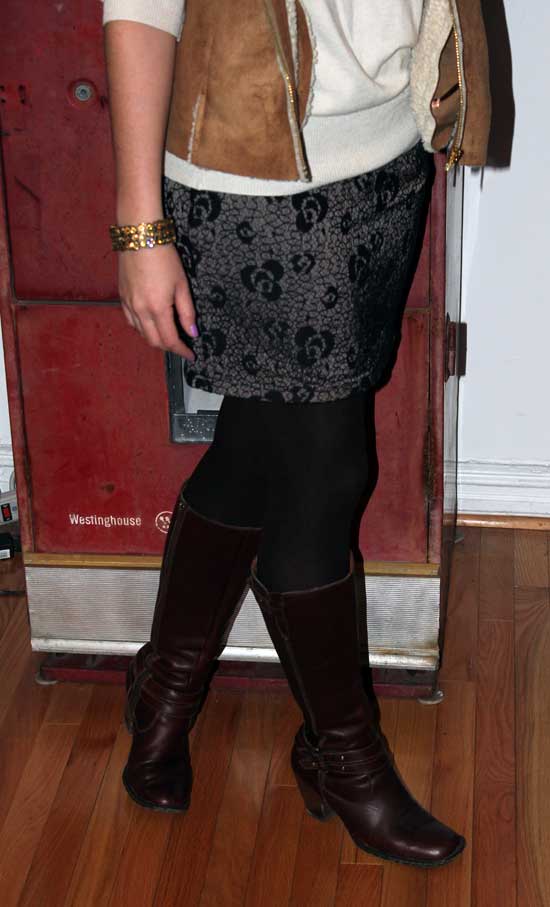 I hope you all enjoyed a lovely long, if chilly, weekend! Since I was feeling a little under the weather on Saturday night, we pushed our date night until Sunday. Unfortunately, on Sunday the weather dropped to absolutely arctic temperatures. I still wanted to look flirty and girly, so I doubled up on top layers, turned up the shearling collar under my thick wool coat and hustled through the crisp wind.  Minus the flaming red nose upon our arrival at the restaurant, I think this outfit worked perfectly. 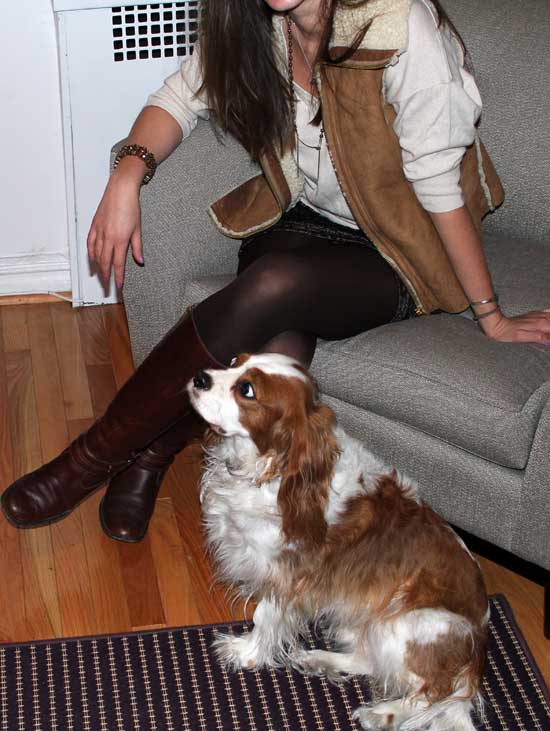 Hello and Happy Monday! It is very rare that I pull myself together for a Monday post, but surprise, surprise here I am. I attended my second hot yoga class of the year last night, and although I am incredibly sore I feel surprisingly calm and relaxed for the start of the week. I’m not at all a “zen” following person, but I’m starting to believe there could be truth in the yoga rumors. Adding to the good vibes this morning was a fun and productive weekend filled with organizing, furniture rearranging, a walk on the High Line due to unseasonably warm weather, and one of my favorite outfits of the winter featuring polka dots, velvet, chambray, and big jewels.

For people working in the fashion industry however, stress levels are likely rising rapidly. This week begins the trade show circuit in New York, and we are just a few weeks away from New York Fashion Week. Style.com created a compilation of what they expect to see at the shows and on the award show red carpets. It’s a fun recap of the pre-fall shows, and a look forward at what to expect when the city steps it up in just a few short weeks. 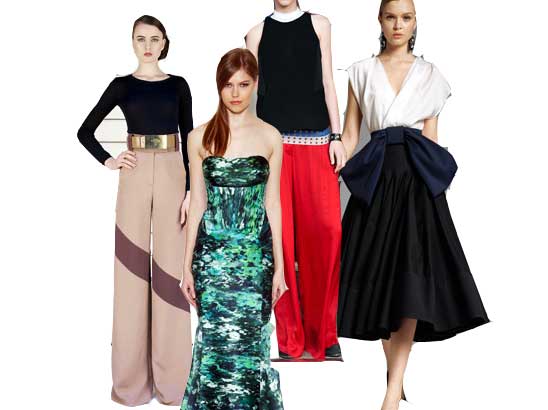 Have a wonderful day and let’s start this week off with a bang! 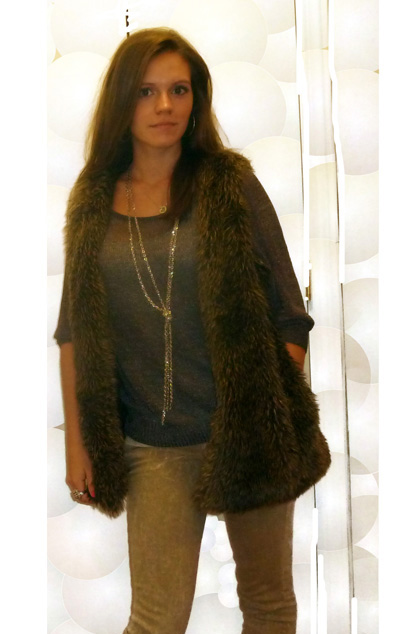 This weekend my parents were in town for a four day weekend. It was fantastic to have an extra long visit so I didn’t attempt to cram every possible activity into two days. The visit was full of eating, shopping, wandering, and bundling up against the newly dropping temperatures.

One of my favorite trends this year is faux fur. While definitely not a new trend, seeing it in stores only reinforced my minor obsession. I now have three faux pieces, here, here and above. I love the cozy clash with ultra glamorous, without the heeby jeeby inducing feelings of the real deal.

Yesterday as I was waiting at the bus stop on a very brisk street in Brooklyn I realized: it is cold. Shocker I know, since it is the first day of December, but every year the first cold snap of air sneaks up on you only to smack you in the face when you least expect it (and when you are less than prepared with your cute, but not entirely wind proof, coat.)

There are certain things that will always pop into my head when making decisions. For instance before bed I can hear my mom telling me not to go to bed with a sink full of dishes. When embarking on a road trip, I can hear my dad tell me to include sensible shoes, water, flashlight, and a warm coat in the trunk. You know, in case you break down in the mountains and have to hike to the nearest gas station. Finally, when making a large purchase, I can hear a number of people telling me to choose a neutral. My grandmother used to constantly reiterate that if you get a crazy pattern, you can only wear it around the same people one time. I never really agreed with this argument, yet I still have predominately black and grey coats.

I am not a huge fan of black and grey as dominant colors, in fact I like to avoid wearing them at least a few days a week. However, my black coat is fairly new, has a fun shape, and key point, incredibly warm. So my new tactic is to down play a dullish color by framing it in eye popping accessories accented with bold colors and plenty of glitz. Here’s to keeping away the winter doldrums…
(P.S I didn’t intend to do this, but it seems Juicy Couture dominates the sparkly winter accessories category!) 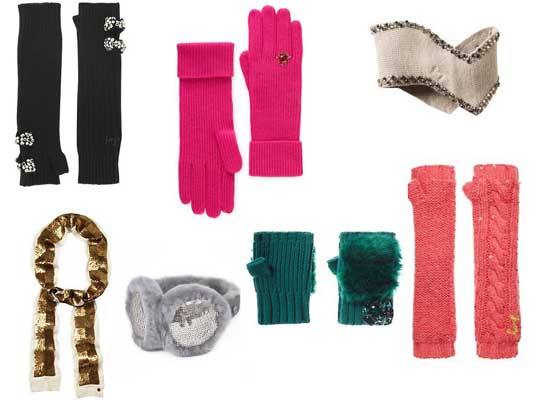